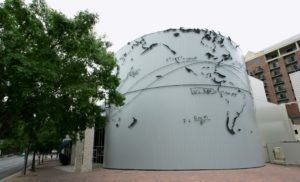 The artwork, “The Challenge of Space” located on the outside of the Challenger Learning Center Planetarium was created by Gregory M. Gomez with funding from Florida’s Art in State Buildings Program. The work features 400 bronze cast elements designed to reflect the Earth’s land masses, rocket launch trajectories, and equations for calculating escape velocities and geosynchronous orbits.

Escape Velocity takes into account the mass of an object (m) and the radius of the surface of the planet (r), then by accelerating the object to the escape velocity (v) it will leave the gravitational field of the planet and continue out to infinity. The equation reads: v=2G m/r = 25,000 mph.

Force and Acceleration applies a force (F) to to any object of mass (m) and causes the object to accelerate (increase its velocity) at a value (a). F=m a, F = mR (Newton’s 2nd)

Force of Gravitation – Any two objects are attracted by a force (F) determined by the masses of the objects (m1 and m2) and the square of the distance between them (d2). I the distance of them is doubled, the force between them is one-quarter. F=G m1 m2 /d2.

Kepler’s 3rd Law – The period (T) of a satellite orbiting a planet is related to the radius of the orbit (r). r3 / T2=constant.

Acceleration caused by thrust – Given a constant thrust of a rocket (T) which has a mass (m), then it will attain an acceleration (a) when leaving the planet’s surface. a=(T-m g) / m (Goddard).

Orbiting Velocity – For any satellite orbiting a planet, the orbital period and the velocity depend only on the radius of the orbit. The International Space Station has an orbital period of 96.7 minutes and a velocity of 17,400 mph. v=2 pr/T

To see more public art in downtown Tallahassee take the downtown public art walk curated by the Council on Culture and Art at https://www.tallahasseearts.org/downtown-public-art-walk/.

Funding and sponsorship from the Council on Culture and Arts.