NASA’s next era will be its greatest yet. That is the clear “roadmap” painted by Journey To Space. The film absolutely annihilates the perception that the space program died with the end of the Space Shuttle Program by showcasing the exciting plans NASA and the space community are working on, and the challenges they must overcome to carry out audacious missions such as landing astronauts on Mars and capturing asteroids.

By using extensive interviews with astronauts Chris Ferguson (Commander of the final shuttle mission) and Serena Aunon (a new astronaut chosen for future flights), as well as a brilliant narration by film and television legend Sir Patrick Stewart, Journey To Space gives a sweeping overview of past space accomplishments, current activities and future plans.

“JOURNEY TO SPACE” will both inspire a new generation of young people to dream of new horizons in space, and engender a new appreciation for the accomplishments of the Space Shuttle Program among an older generation who came to take it for granted.

Co-produced and co-distributed by K2 Films, Inc. and Giant Screen Films and is presented at the Challenger Learning Center Downtown Digital Dome Theatre and Planetarium.

This program sponsored in part through COCA’s Cultural Grant Program funded by the City of Tallahassee and Leon County. Your ticket purchase supports the Challenger Learning Center’s community outreach and educational programming. 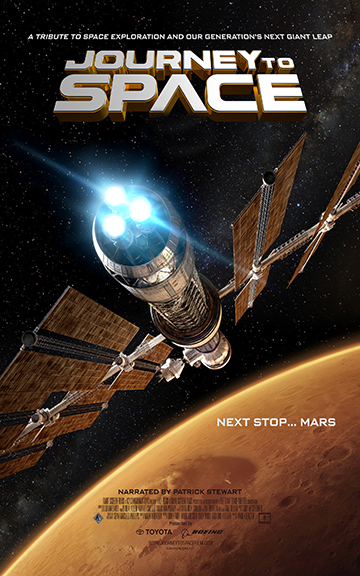